SPEAK TO OUR UK PATIENT LIAISON

FOR ALL OTHER INQUIRIES, SPEAK TO OUR INTERNATIONAL PATIENT LIAISON

GET IN TOUCH
CLOSE
CLOSE

Shady Grove Fertility’s own Dr. Paulette Brown hosted a live Q&A session to answer questions about the causes of miscarriages and what steps to take if you have experienced a miscarriage.

The good news for women over 35 who are thinking about donor egg treatment is, the chances of miscarriage using donor eggs are much lower than for a woman of advanced maternal age who is trying to conceive using her own eggs. As woman age, their chance of miscarriage greatly increases due to lower egg quality, which increases the possibility of a genetic abnormality. When using a donated egg from a younger woman, the concern regarding egg quality is nearly eliminated, and women have higher rates of live birth per clinical pregnancy compared with their counterparts of the same age using their own eggs.

Miscarriage can be caused by a variety of identifiable reasons, including but not limited to hormonal issues, infection, or physical problems within the mother. Spontaneous miscarriages may seem hard to predict, but most can be explained scientifically.

An anatomic miscarriage is one in which the uterus is partitioned by a septum or fibroid, or fluid-filled tube. These anomalies are derived from problems within the anatomy of the mother, and can be present from birth (congenital) or acquired over time.

Hormonal causes of miscarriage could be from a disease in the thyroid in which the thyroid hormone is not produced properly, impeding normal fetus development.

The miscarriage may also be immunologic, meaning failures within the immune system prohibit a successful pregnancy. Examples of this could be an anti-phospholipid antibody syndrome or thrombophilia, a blood clotting issue that prevents blood and nutrients from reaching the embryo or fetus.

A chromosomal abnormality may also be the cause of miscarriage, in which the embryo either has too many or too few chromosomes. 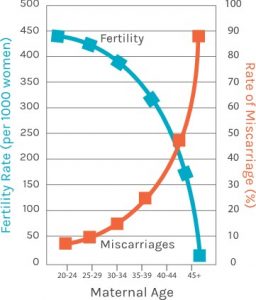 2. How common is a miscarriage after donor egg treatment?

Since egg quality and age are leading drivers to the rate of miscarriage, patients using donor egg treatment often see a lower rate of miscarriage than their same age counterparts who are using their own eggs. In 2015, the average miscarriage rate for women using in vitro fertilization (IVF) over 40 was 31 percent. But, for women using a donor egg, the miscarriage rate dropped to 16 percent. Patients with decreased egg quality give themselves the greatest opportunity for a successful pregnancy when using donated eggs from a younger women due to better quality eggs and a greater quantity of eggs.

3. I had a miscarriage and haven’t been able to conceive again. What are the chances of getting pregnant and having a successful pregnancy?

While reports vary, up to one in four pregnancies will result in a miscarriage. However, the chance of having multiple miscarriages does decrease and the rate of having two consecutive miscarriages (recurrent pregnancy loss) drops to roughly 2 to 5 percent.

While miscarriage can be emotionally devastating, patients enrolled in our Shared Risk 100% Refund Programme are able to move on to the next round of treatment for no additional cost, hopefully reducing the stress and pressure that would otherwise be surrounding the decision of whether to move forward with more treatment.

4. What are the chances of miscarriage at the point of pregnancy in which the baby is moving and measured on time?

Once the pregnancy has reached the second trimester, the risk of miscarriage is significantly lowered. Once a heartbeat is seen via ultrasound, the risk comes down to about 7 percent.

If you would like to learn more about miscarriages, or our Egg Donation Programme, please contact Sarah Esdaile, our UK liaison, or Amanda Segal, our international patient liaison at 0208.003.0827, or email [email protected].

Editor’s Note: This post was originally published in August 2016 and has been updated for accuracy and comprehensiveness as of February 7, 2018.